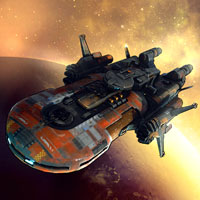 Destroyer is the king of warships. Destroyers carry a lot of diverse weaponry: Ion, Gauss, Plasma. Their advanced computer systems allow Destroyers to make shots that cannot be avoided even by the fast maneuverable fighters, and to supply allies with extra tactical information. Since the destroyers are very large, their own maneuverability is very limited, and in combat they act more like a battle station than a battleship. Their fuel consumption is as high as their battle power. Besides Weapons Technology, development of Ion Technology, and Plasma Technology also increases their attack.

Attack without a miss