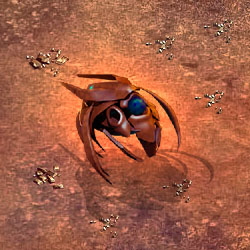 The toss, a highly-developed race, faced the problem of expensive manual labor. Too few of them wanted to spend their time mining raw materials, and Khala's code doesn't allowed them to make other races their slaves. Therefore, their mining equipment became fully automated. A red droid is equipped with a magnetic sensor, which is capable to catch the deep veins of the metal on the far side of the surface. Also, the droid has everything for drilling and field development. When active, droids consume energy. Each subsequent droid produce less resources due to increasing logistic complexity. Cannot be covered by FAS. Unit maintenance costs are not considered by amortization.