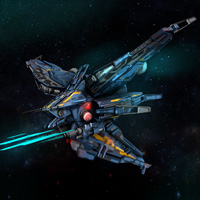 While improving the Fighter, researchers reached a point at which conventional drives no longer provided sufficient performance. To move the ship optimally, the Impulse Drive was employed for the first time. This increased the costs, but also opened new possibilities. With new engine, more energy could be used for weapons and shields. In addition, usage of high-quality materials for this new family of fighters has led to improved structural integrity and higher firepower. With these changes, Stealth fighters opened a new era of shipbuilding, laying the foundation for the cruiser.
Abilities: