Welcome back, your last visit was  Today, 03:47 Search
Back2 pages12Next

Why do you not fly there and take the Planet from him ?

According to the new rule change, this should be possible?
Topic: HH alliance |

you've forgot to mention that the big alliances then cry like babies, when you do the same to them.

There are many ways, you can hurt big alliances:

All these attacks are valid attacks according to the game rules by Vasya.
But the Russians have some sort of agreement that these things should not be done.
This agreement I call the unwritten rules.

A favorite trick of the Russians is then this:

When a player of a small alliance is doing the same: they react like in your screen shots
Topic: HH alliance |

5 May 2021 12:13:25
Message #29
Vasya once said that everything is allowed within the standard rules.
The big alliances make different rules.
And they want us to obey their rules - what we mostly do - because else they destroy us

BUT - when these big alliances want, they don't care about these "unwritten" rules and fuck smaller alliance with all they have.
So with HH I don't know if they don`t know these unwritten rules - or if they are Rebels against these evil big alliances.
Topic: Premium subscription and new tosses station | 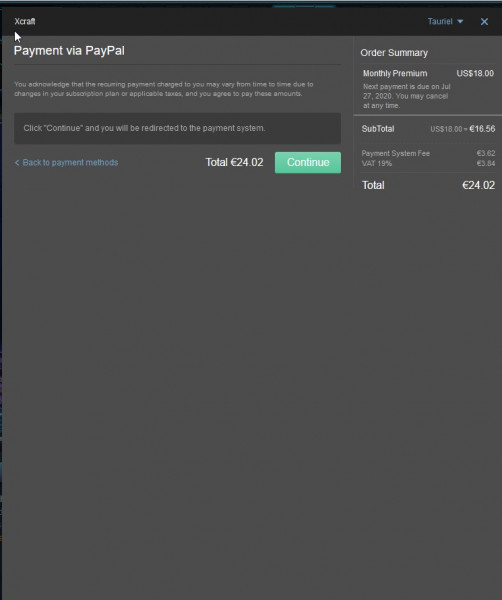 A typical Vasya cheat.
On the website they advertise with USD 18 for premium.
The real costs - as you see in the screenshot are about 24 Euro with Paypal.

Why no fasterpay for Premium ?
Topic: Limit the power and abuse of big alliances |


I would also propose these changes:


- players cannot change alliance every 7 days, but only every 6 months


-  all 3 accounts of one player ( Terran, Xerj and Toss ) must be in the same alliance  or cannot be in different alliances.
Topic: Limit the power and abuse of big alliances |

29 September 2018 21:33:33
Message #26
Currently, we have an unpleasant situation in this game.
The top alliances are ruling the game and bullying the smaller alliances. They can do this because they don't fight each other.
Before we had 2 big parties, which were enemies. That was much better for the smaller alliances.

Ideas to solve the problem:


-  the top 10 alliances are not allowed to have NAPs or PACs with each other. Existing NAPs are automatically canceled by the system each day when both alliances are in the Top 10.


-  the server should charge a tax on production from each member of an alliance, depending on how big the alliance is.
for example:

This would limit the power of the big alliance and provide a fairer game.

Topic: Buildings can be increased |

Do you understand such easy logical thinking ?

Just a friendly visit to show the players here how easily a tutor can be destroyed -  jajajajaja
Topic: New premium kit "First Flagship" |

I'm pretty sure that you will make an "Arschkriecher" Request to ban me here.
I don't care.


1.)  As I can see these Flagship offers are available for new players. And as said, that's exactly the group which is targeted by Vasya.

2.)  Text of fees in bestiary.
I've told you to ask Stein. She will explain you.
Are you able to read what I write?


But I see you are running out of logical arguments.  So we better stop here. I think everything is said.

again wrong argumentation and no idea of how the game works.

You remind me of some idiots in Venezuela who still defend Chavez / Maduro socialism, although the people in the country with the highest oil reserves are starving..........

yes. they buy things cheaper and sell it for higher prices.  But they don't make "special offers" where they sell the potatoes for prices 3 x higher than normal in the hope to find the idiot of the day

- these are the people Vasya is targeting.  None of the experienced players will buy these overpriced flagships from Vasya.
So whats your point?

I agree that small players should wait with converting their medals into flagships until they are more experienced.
But there is one thing they can do with some of them:   cheap fleetsave
Are you teaching them how to do this?


-  Commission fees:
you can apply for a new green medal.  The text is wrong.  The HC go directly to Vasya. Ask Stein.

Of course, he does it with an algorithm and not per hand. But in the end, he determines the prices.

it looks like you are a bigger Idi...ot than I thought.
Or in German we call it  "Arschkriecher".   Perhaps to get more green medals  ???    jajajaja

They cannot be destroyed. They are determined by the fees which Vasya charges. And these fees are directly for him.

If Vasya really wants to support new players he could:

- offer the items 20% cheaper than in the bestiary

- limited to 2 items per player
This would be a fair offer.  Or what do you think?

this is a purely commercial project. Not an open source project or a non-profit organization.

It's the same as a Gas Station or a Super Market or Microsoft Corporation.


With your stupid argumentation, you would need also to

- pay triple prices for Microsoft Software "to support the project"

Are you doing this?


So the motivation behind

- Vasya's offer is to get more money for him

- you defending him is to get more "Arschkriecher" medals

sorry - but when you believe the lies of the admins, you are an idi----t.


Vasya and his villains want more money.  They think the players are idiots - so they try to get some idiots to pay triple (or higher prices) for flagships.

Waiting for items of the bestiary is no problem.

Just plan a little ahead.


Apparently, Vasya's Russian street hookers have raised the prices for him again. So he tries to get more money from us.


Vasya uses always the same tricks to get players money.

With the time you will know them.

The biggest joke is that the number of items is limited.  He says more or less:  I want to trick you. But not for all your money. jajajaja


So - when you want a flagship:   Buy it in the bestiary for normal prices.

And for beginners:  Don't buy a flagship at all. The Russians are only waiting that you have one. And then they destroy it - which is easy for them.


So for beginners, Vasya's offer is double tricky.


The 90% was originally implemented to compensate players for the change of alliance stations from planets to stations.

Where is my compensation now ??

Is Vasya again stealing from his players?

What kind of psychological damage do you have, so that you need always to take away from other people ???

Topic: How can newer player protect his planets from destruction?? |

No one can destroy ur planets.

1.)  There is a new player protection. All "red" players cannot attack you. They have too many points.

2.) Your capital is always safe

3.) Most players dont have the tech to destroy planets. And when they have they are for sure over ur points range.

So for now you are safe.
( when Russians say different --- russian propaganda)

what enemies will do is hunting your fleet.
So keep in mind that you do always fleetsave when ur not online.
Topic: Increase in the prices of the first levels of cheap officers |

please tell your boss this:


The problem was not the old the interface.

The real problem is the incompetent and corrupt development team which would be replaced by a "real" company almost immediately.
Why?

- no idea about User Experience

Seems to me that your Developer team are some drunk script kiddies who never had a proper education in IT.

- Replace them with a proper developer team who has an idea what they are doing.

Or close down the fucking server.

Because paying customers have enough of such unprofessional behavior.

Topic: The opportunity to surround alliance territories is realize |

this explains my bug report in the bug section.


This change seems to be especially made for the Tehb alliance.


1.)  why are these cheating players from Theb supported that much by Admins ??   ( I guess because one of the Admins is Theb )


2.)  why did Theb know in advance of this new change in favour of them ?

( apparently they knew, as they didnt fix their network in fast time as several times before )


I dont like this corruption between Admins and Tehb at all.   As a paying member here I expect equal chances for all players.
And not the cheating Theb players been given all advantages.

What about money back for all my accounts and I stop playing here ???
Topic: Tehb (https://xcraft.net/alliance/14460/) are traitors and thieves |


Well here is the battle report how the asteroid was built during Phoenix attack on one of player WWW1 planets.


- in my area  ( 19:461:3)  I had a non-aggression agreement with Tehb.
I dont attack their asteroides and they dont attack me.  (based on a little fight before the agreement)
Well - a good agreement between gentlemen. But Tehb of course betrayed me and attacked my fleet on my moon.
A nice attack. My local Tehb "friends" scanned me and checked my online status.
Then they flew in some asshole from another sector ( SUPERKOMMANDOR) and he attacked my fleet.
Atfer the attack he wrote something like:  "when you are decent person, you dont attack now our asteroides. Because it was a fair battle"
Means that he knew about the agreement.

The same day I started my attacks on their asteroides and alliance stations.

Then they started crying:   There are unwritten rules. Noone can attack asteroides ------------ blablabla

They also stated that they "earned" all their asteroides and that all are rightfully theirs.


Well here is the story of my friend WWW1  :


at [45:453:6] my friend WWW1 (https://xcraft.net/user/WWW1) got an asteroide from Phoenix attack.
he built buildings there and operated it for some time.

Now a huge Tehb player has it.
How did this come ?

Of course all planned by Theb.
Officially they claim that they got all asteroides honestly.

These motherfuckers are thieves and traitors
or as a friend of mine calls them: "V...a asshole cleaners"

Are these unwritten rules just for us smaller players and not for Tehb ???


Guys:  when you are under pressure by Theb do this

- scan the asteroides  every day
- when there is light defence and you see providers / recyclers / destillers ,  attack them and take the debris

- when they claim, that asteroides cannot be attacked:   show them the example of my friend  WWW1

- when you don't have the balls to attack them:  send me PM with the data of the asteroide.  I will attack it when I'm in the area

You as a non-russian non-Tehb player are a pure victim for them.

Your task is to buy HC with real money, so that they can destroy your fleets or planets.

Russians can exchange HC back for real money. Therefore you understand maybe their motivation.


In a real game without bias, admins should never be allowed to play.

Like in online casinos or online poker rooms, where no employee or family of employed is allowed to play.


But Russians like corruption. And its a russian server.